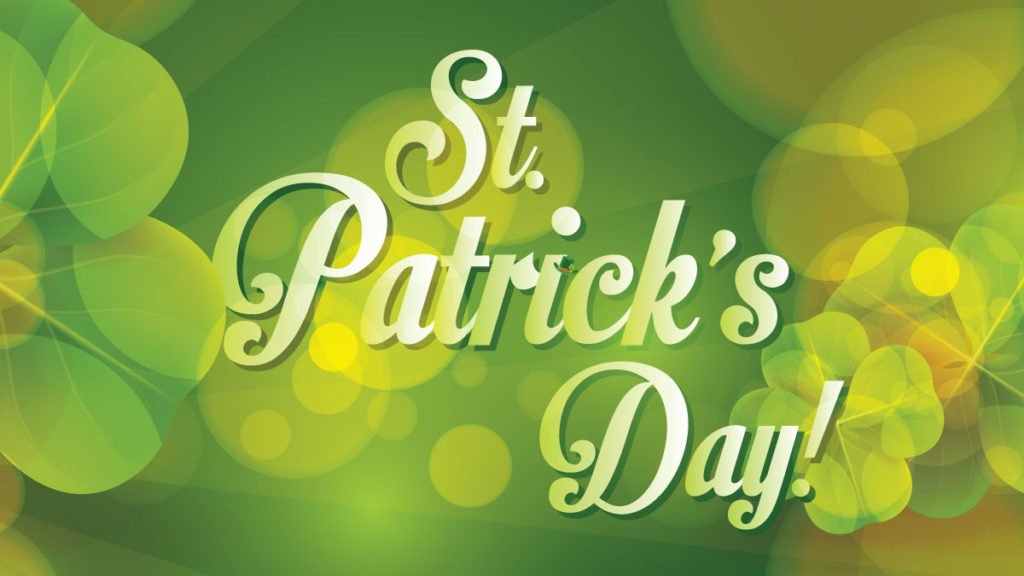 Saint Patrick’s Day, while not a legal holiday in the United States, is nonetheless widely recognized and observed throughout the country as a celebration of Irish and Irish-American culture. Celebrations include prominent displays of the color green, religious observances, numerous parades, and lots of beer or other alcohol.

With the COVID-19 Crisis, celebrations this year will not have the crowded conditions of previous years.  However, there are still opportunities for businesses to tie in a promotion.  Plus, many individuals will celebrate at home or in much smaller gathering places.

We have placed on this page some of our most popular products. Keep in mind that almost any promo item in emerald green can have a custom imprint for St. Patrick’s Day. 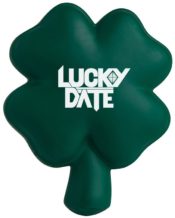 It looks like it’s your lucky day with the shamrock-shaped stress reliever (left). Find your pot of gold at your next campaign with these promo items shaped like Shamrocks. Ideal for St. Patrick themed events, conventions, or trade shows.  It can be customized with your name, logo, or message. We have over 200 promo items from key rings (shown right) to magnets and fans shaped like a Shamrock. 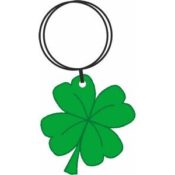 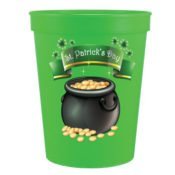 Take any of our green stadium cups (shown left), mugs, or other drinkware, and add your own message for a St. Patrick’s Day gift. Please send us your art, or we can design something for your specific event.   See also our line of beer steins and also our Green Irish Coffee Mug. Irish Tea and mug gift set is shown right. 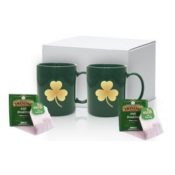 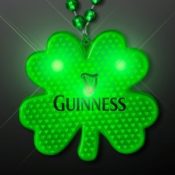 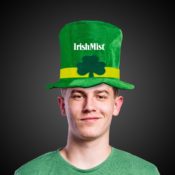 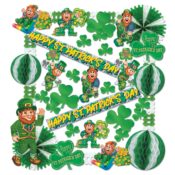 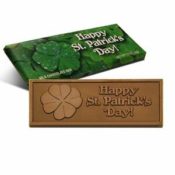 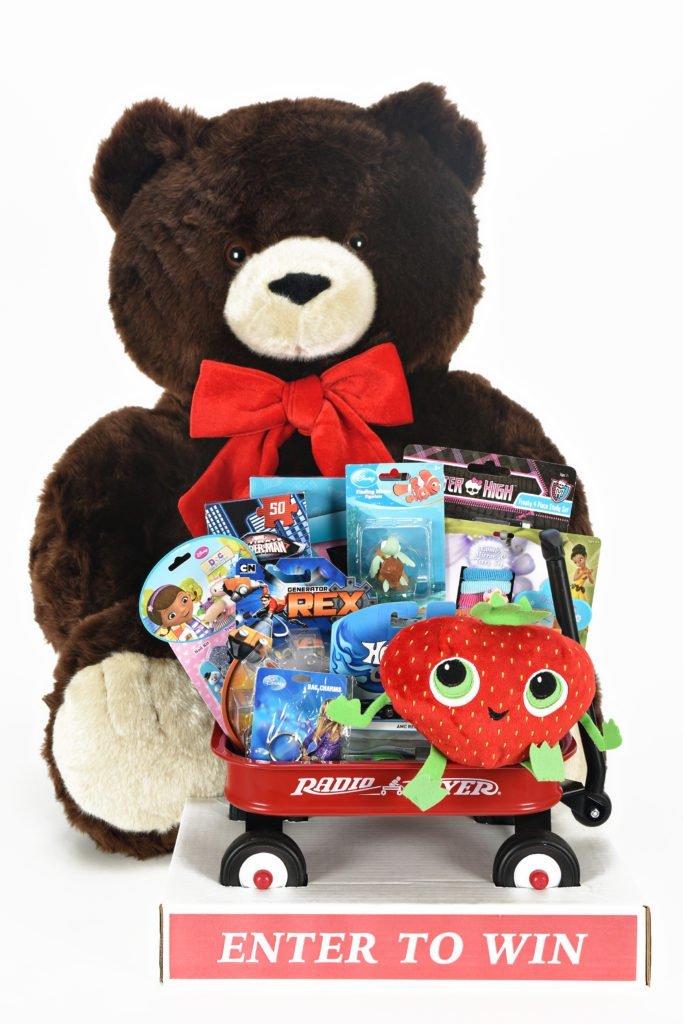 Our most popular promotion can be custom produced with a St. Patrick’s Day Theme.  It comes with everything you need for a successful promotion, including the bear, a little red wagon, and an entry box and entry blanks.  We’ll tie a green bow around Bernie’s neck and add a St. Patrick’s Day Hat.  We also have toy-filled promotions for  Easter, Summer Patriotic, Halloween, and Christmas.

Saint Patrick was a 5th-century Romano-British Christian missionary and bishop in Ireland. Much of what is known about Saint Patrick comes from the Declaration, allegedly written by Patrick himself. It is believed that he was born in the fourth century into a wealthy family. His father was a deacon, and his grandfather was a priest in the Christian church. According to the Declaration, at the age of sixteen, he was kidnapped by Irish raiders and taken as a slave to Gaelic Ireland, where he spent six years there working as a shepherd and that during this time he “found God.” The Declaration says that God told Patrick to flee to the coast, where a ship would be waiting to take him home. After making his way home, Patrick went on to become a priest.

According to tradition, Patrick returned to Ireland to convert the pagan Irish to Christianity. The Declaration says that he spent many years evangelizing in the northern half of Ireland and converted “thousands.” Patrick’s efforts against the druids were eventually turned into an allegory in which he drove “snakes” out of Ireland, even though snakes were not known to inhabit the region.

Tradition holds that he died on 17 March and was buried at Downpatrick. Over the following centuries, many legends grew up around Patrick, and he became Ireland’s foremost saint.

According to legend, Saint Patrick used the three-leaved shamrock to explain the Holy Trinity to Irish pagans.

Celebrations generally involve public parades and festivals, Irish traditional music sessions, and green attire or shamrocks. There are also formal gatherings such as banquets and dances, although these were more common in the past. Saint Patrick’s Day parades began in North America in the 18th century but did not spread to Ireland until the 20th century. The participants generally include marching bands, the military, fire brigades, cultural organizations, charitable organizations, voluntary associations, youth groups, fraternities, etc. However, over time, many of the parades have become more akin to a carnival. More effort is made to use the Irish language, especially in Ireland, where the week of Saint Patrick’s Day is “Irish language week.”

On Saint Patrick’s Day, it is customary to wear shamrocks, green clothing, or green accessories. Saint Patrick is said to have used the shamrock, a three-leaved plant, to explain the Holy Trinity to the pagan Irish. This story first appears in writing in 1726, though it may be older. In pagan Ireland, three was a significant number, and the Irish had many triple deities, which may have aided St Patrick in his evangelization efforts. Patricia Monaghan says there is no evidence that the shamrock was sacred to the pagan Irish.

The color green was further associated with Ireland when the Irish Catholic Confederation used the green harp flag.  Green ribbons and shamrocks have been worn on St Patrick’s Day since at least the 1680s.[ The Friendly Brothers of St Patrick, an Irish fraternity founded in about 1750, adopted green as its color. However, when the Order of St. Patrick—an Anglo-Irish chivalric order—was founded in 1783, it adopted blue as its color, which led to blue being associated with St Patrick. During the 1790s, green would become associated with Irish nationalism due to its use by the United Irishmen. 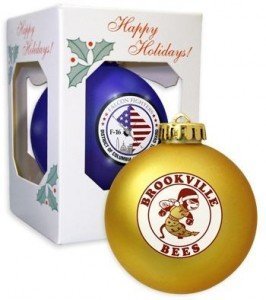 Now is the time to order ornaments with your company name, logo, or message. 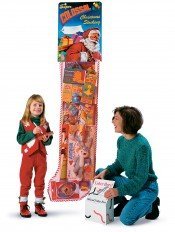 It’s not too early to be thinking about Christmas. Giant Christmas Stocking is just one of the many Christmas and holiday promotional items we have 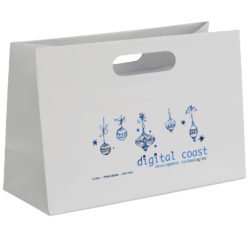 We have hundreds of bags that can be imprinted with your company name or logo for the holidays.

Find Ornaments in all shapes and sizes that can be customized for your business. 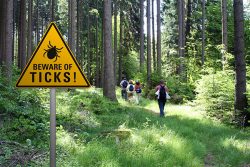 It happens every year — Warmer weather brings out ticks and an increasing threat of tick-borne diseases and illnesses. Mosquitoes, fleas, and ticks are bloodsucking bugs whose bites can infect humans with diseases like dengue, Zika, Lyme, or plague. Put your name or logo on hundreds of promo items to help repel bugs.

Bagwell Promotions offers thousands of ideas for your Winter Promotions.  From ice scrapers to blankets, we have a promotion to make your business stand out this winter.

Made In The USA 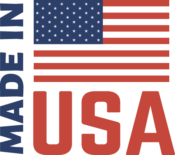 Especially today, many businesses and non-profits are looking for items made here in the USA. Put your name, message, or logo on thousands of USA Made products. What does Made in the USA mean? Find out here. 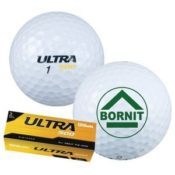 Almost anytime is a great time for Golf. Why not include your company name, logo, or message on a Golf Promotion. We have golf balls, golf tees, awards, hats and shirts, golf towels, golf calendars, golf bags, and golf clubs.

Work From Home Is The New Normal. Recent events have more and more individuals working from home, and that looks to continue for the foreseeable future. Bagwell Promotions has many items that can make people more productive. Most of these items can be imprinted with your logo, name, or message.
Share This